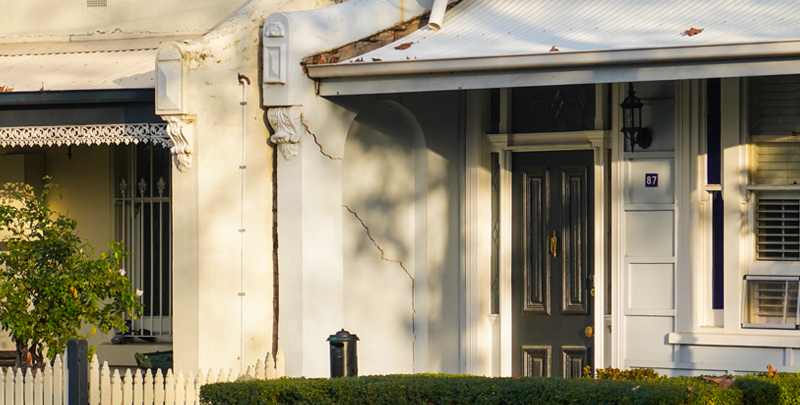 Q & A with Peter Alexander from Safehome Building Inpections

It’s well used for a reason – land position, size and proximity are the major drivers of capital appreciation when it comes to property investing.

However, unless you’re planning on knocking down the premises and embarking on a new development or rebuild – the state of the home that sits on that land will have a significant impact on your long term investment success. That includes both rental and resale outcomes.

While dilapidated knock down jobs are easy to spot, many faults in otherwise well presented homes are much harder.

And while they may not always hit you when inspecting a property – they can certainly have a devastating hit on your finances down the track.

Repairs and maintenance can easily drain tens, and even hundreds of thousands of dollars from an investment portfolio.

That’s why it’s critical an expert building and pest inspection is carried out before purchasing a property.

It’s worth noting, not all people doing your pre-purchase building inspections in Melbourne are qualified or insured.

Peter Alexander definitely is. He’s Director and lead inspector at Safehome Building Inspections in Melbourne and has been operating in the market since 2004.

Peter has completed a Diploma in Building Surveying. He also has Certificate in Inspect and Report on Timber Pests and Certificate 3 in Asset maintenance (Pest management Technical).

Hence, he is recognised as one of the few qualified and insured building inspectors in Melbourne.

How do you make sure your building inspector is thorough and trust worthy?

I think it’s imperative that people look at the qualifications or ask for qualifications. Ask for the insurance certificate, professional indemnity insurance.

It’s also important to ask for a sample building and pest inspection report from them, so you know what you’re paying for. There can be a significant difference in the quality and depth of reports –  some can be five pages, while others can be 50 to 100 pages.

We organise everything with the agent, before we head to the job. We have a large amount of equipment we take with us – everything from a thermal imaging camera, a moisture metre, to torches, and timber tappers.

Personally, I’ve had the same process for nearly 20 years. When I get to the house, I stand out the front to inspect the roof lines, to see if they are true, that there’s no sagging and bowing. I look to make sure there’s no uneven or dropping walls, and no large gaps between window frames and walls – as this may mean that there’s been some sort of movement, either current or past, which could indicate a major footings issue.

From there, I enter the property and start to get into the nitty gritty. I’ll climb the ladder and get into the roof, looking for any cracked tiles and rust roofing, as well as the flashings, gutters, and downpipes.

From there I work my way down the walls, looking for unevenness, rising damp, poor subfloor ventilation, and drainage issues with slope of land. If it’s sloping to the house that means there could be water, damp and mould underneath the house.

I’ll also make sure I cover off other factors, such as paint deterioration, fencing, and check to see if there’s any leaks in the eaves.

Once the outside is finished, then I head inside. Again, I’m looking for the main issues that are going to cost the client money. An uneven floor could be an indicator that there’s a stumping problem or a footings problem.

However, it can also mean that the house has been restumped, but hasn’t been levelled off.

So that’s not really a problem if all the footings are sound, and it’s just a bit out of level. This needs to be taken on a case by case basis. That might not worry purchasers buying it for an investment. They may just want a sound property that will last them 10 years without any problems.

At another level, some people don’t care about $20,000 worth of rectification work depending on the plan. But of course, many people do.

If I’m investing in a property, I want to know that it’s not going to cost me a lot of money for the next 10 years. A lot of older houses, from the 1800s, to the early 1900s will always have some issues, unless they’ve been studiously renovated recently. While there is always something to fix, once it’s been repaired, it can be ticked off.

A common issue with the older solid brick dwellings is having to reinstate the damp proof course, if they fail due to age. Essentially they are just an old bitumen compound through the mortar bed, at floor level. They are going to fail at some stage.

Another major potential cost is when footings’ foundations fail due to major cracking, and when the walls are out of plumb. This may require underpinning work.

Another typical issue with older homes is that the lath and plaster walls typically need to be replaced after 70 to 80 years, as they’ll just continue to crack. If you shine the torch up the wall, you’ll see where all the cracks are patched.

In your experience do vendors/agents actively try to hide faults?

If you go into a house that’s freshly painted – straightaway, I’m thinking okay, why have they done that? Have they painted it just to make the house look good, or to hide things?

The torch inspection shows all the cracks, which I report on. I tell clients they may reopen or they may not. I warn people what may occur, so they have all the information, and can make an informed decision.

I’ve had agents, and I won’t name them, but I’ve gone to jobs where they’ve put boxes in places that you just wouldn’t put boxes. So I’ll move them to the side and find that the floor is rotten. I’ve seen boxes in shower recesses and then underneath there’s been drummy tiles.

The worst one was probably termites in a kitchen bench. They draped the real estate agent’s flag over it during the open for inspection. I thought why would you put that there? I had a look underneath and it was being used to cover termite damage.

Having said that, most people are pretty good. On the whole, it is quite rare that agents and vendors will deliberately hide something or mislead buyers.

How often do you advise people to walk away from a property?

On the whole I don’t often advise people to walk away from a property. It might be one a month, and that’s typically termite issues.

That’s because if we find termite damage in a subfloor, we can not then just go inside and start ripping up behind the walls to see what the studs are like. So there’s that real risk that there could be termite damage going all the way up through to the roof.

I judge these things on what I would do, because everyone is different. I could find rising damp, in a house and one person might say, ‘I’m going nowhere near it.’ And another person might say, ‘I don’t care. I’ll just get it fixed.’ So in those cases I won’t tell people not to buy it. That’s not my job. However, definitely with bad termite damage, I have told people, ‘if it was me, I wouldn’t buy it.’

Is it just weatherboard homes that incur termite damage?

Any house that has a timber component can get termites. It doesn’t matter whether it’s a brick or weatherboard. Anything that’s on a suspended floor, i.e. stumps – termites can enter it, they can build their mud tunnel up the stump. Whether it be a brick veneer or a weatherboard, termites can eat the frame, and get into the floor.

I’ve seen an old brick veneer house on a slab in Frankston, and that place was riddled with termites, even though it was on a slab. They came up through the bathroom pipe penetration, and went right into the roof. It worked out to be about $148,000 worth of damage.

Unfortunately, the person who had bought that house did so without getting an inspection first. They just wanted us to check it for anything that needed to be fixed. So they were stuck with that, which was pretty sad.

The most termite prone parts of a solid brick house on a slab is in the skirting boards or window frames, but they are relatively cheap to fix. It’s pretty rare for termites to get up into the roof, but it is possible.

Is there anything else buyers should be wary of?

In recent times I’ve seen the wording for a “subject to building inspection” clause within a contract of sale changing slightly.  The vendor or their representative will try to sneak in extra commentary that requires the building inspection report to state that the building suffers from “major structural defects” in order to nullify the contract.

Often buyers miss the implication of this and sign away. They’ll later find that there are multiple defects, but they aren’t of a structural nature.

These types of faults can still cost a lot of money to fix. For example, a whole roof might need replacing, or there may be major issues with rising damp, or leaks from bathrooms.

I’ve had buyers ring up and say, ‘can you write that it’s a major structural defect? I need to get out of this. I can’t buy this property.’ I have to tell them, ‘I’m sorry, I can’t because it’s not structural.’

That’s why it’s so integral that all your property investment purchases are either subject to a satisfactory building and pest inspection or one is conducted prior to purchase – it’s that simple and easy.